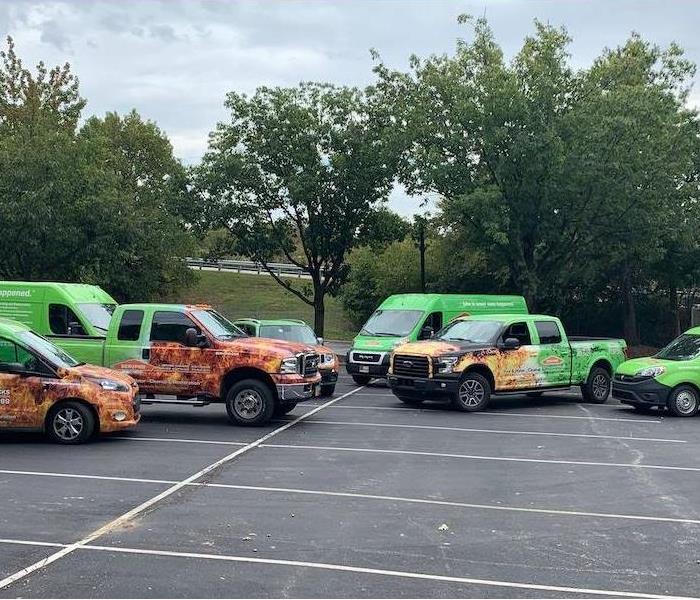 SERVPRO has the skilled technicians your property needs for thorough and effective water removal. Call the experts today at (610) 779-8189.

The area now known as Reading did not get this name until around 1748. Previously, this intersection between two essential valleys of the East Penn-Lebanon Valley and the Schuylkill River carried the moniker of Finney's Ford. Later, two transplants from England, Thomas, and Richard Penn, drew up the town's plans and renamed it after the county seat from where they hailed from Berkshire.

When the Brits and the French fought over land claims and the fur trade during the French and Indian War, which lasted from 1754 until 1763, Reading became crucial during this time as a military base that supported a chain of forts that ran along the Blue Mountains. The town also became the hub of the iron industry. By the time of the American Revolution in 1776, iron ore products' total production exceeded that from English and directly assisted with supplying Washington's troops with the needed ammo and weapons, including cannons and rifles. The town has played a role in holding captured Hessian soldiers from the Battle of Trenton.

The iron ore, coal, and bulk cargo trade were the livelihoods of many early residents of Reading and the need to create an efficient way to transport the materials existed. In the early 1800s, canals were seen as the solution to this dilemma. The Schuylkill Canal completed in 1825, ran north-south, and connected the town with Philadelphia and the Delaware River. A few years later, The Union Canal completed in 1828, and joined the Schuylkill and Susquehanna Rivers, and ran from the city to Middletown, Pennsylvania, which is a few miles south of Harrisburg, Pennsylvania. This was the standard method of moving around raw materials and bulk goods until the railroads' entrance in the late 1880s.

In the present, Reading is still an industrial city; in fact, the motto of the town is: "Deo Adjuvante Labor Proficit" ("Labor profits with the help of God"), but it no longer relies on canals or railroads as the delivery system. The area also is one of the centers for agriculture, including:

Anyone that plays the board game "Monopoly" has seen Reading Railroad as one of the options to purchase. This company was running from 1924 until 1976 and responsible for many materials throughout the Northeastern United States. However, with the decline of rail delivery systems' need, the company merged with Conrail in the mid-1970s. In the present, some of the top employers in the area are:

The town of Reading is the base of the beginning of the Reading Prong. This geological formation is part of the Appalachian Highlands and formed of mountains containing heavy deposits of crystalline metamorphic rock, one of the oldest types of rocks on the planet.

The Prong goes through Pennsylvania, the Northern part of New Jersey, and Southern New York, finally terminating in Connecticut. Rocks from the Prong are notable due to their high uranium concentrations, which is the root cause of radon as the mineral decays. The gaseous radon is a potential health hazard inside structures constructed along the Prong.

Great Places to Visit in Reading

The city of Reading has several cultural institutions of interest. Music enthusiasts can enjoy the Reading Symphony Orchestra and the Reading Choral Society. The GoggleWorks Art Gallery and the Reading Public Museum, and the Historical Society of Berks County all have regular exhibitions.

The city had several movie and theater palaces, which are examples of grand design and architecture. However, recession and time took their toll, and in the present, only one of these impressive structures still stands, The Rajah Shrine. The Astor Theatre got demolished in 1998; however, the Art Deco chandelier and wrought iron gates got rescued and are on permanent display inside The Sovereign Center, an arena built on the site of the Astor.

The City of Reading and Reutlingen, Germany, formed a sister-city relationship and participated in a yearly student exchange. Students from the local high school can apply to become part of the trade and travel to Germany for two weeks to experience life in Reutlingen while two students from Germany come back to Reading. In 1992, the same program got adopted between Reading and Changzhi, Shanxi, China.

The year-round weather in Reading is mild. July usually is the hottest month, with temperatures hitting around 80-degrees Fahrenheit and occasionally breaking 100-degrees. Winters are cold and often snowy, with temperatures averaging around 30-degrees Fahrenheit. Flooding from the Schuylkill River is an event that residents stay on the alert for as it is not uncommon, particularly after the remnants of hurricanes or tropical storms rolling through the region.

How Do Professional Water Restoration Companies Differ From DIY Methods?

When it comes to water damage cleanup in your Reading home, using water restoration companies such as SERVPRO rather than DIY methods to remove the water and dry your home can make a big difference in the outcome. The technicians undergo extensive training using the standards established by the IICRC ( Institute of Inspection, Cleaning and Restoration Certification).

The standard advice for home cleanup of water damage usually involves using towels and box fans to remove and dry the property. This may work to give surfaces the appearance of being dry; however, this does little to nothing to address water that migrated behind walls or under flooring. This water has the potential to cause a host of issues to the structure, including:

The technicians have an array of detection equipment, including infrared cameras and probes to locate water within a structure without the need to open walls or physically inspect the subfloor. The techs can use their extraction equipment to remove water and then follow up with their drying equipment that uses high-velocity air, forcing embedded moisture to rise where their professional dehumidification units capture it. This leads to complete drying of the structure, which gets verified post-drying to ensure no hidden areas of water remain on-site.

SERVPRO of Reading at (610) 779-8189 stands out among water restoration companies in Reading as a professional firm local residents can count on for any size water damage cleanup needed.